Sara Wilson was first introduced to The Theatre Lab in 2019 when she and her daughters took part in the Life Stories Program with TAPS (Tragedy Assistance Program for Survivors).

TTL: Tell us a little bit about the Tragedy Assistance Program for Survivors (TAPS) and your involvement with this amazing organization:

SW: The Tragedy Assistance Program for Survivors (TAPS) is a nonprofit organization that provides hope and healing – with peer-based support — for bereaved military loved ones.  If you are a spouse, parent, child, sibling, battle buddy, other close relative, or even just a friend of someone who has served in the military and has died, you are eligible to join TAPS.  And there is no cost to join.

Our members find comfort and caring in the wake of their loss, no matter how long ago the person served or died and no matter how their loved one died.  An average of about 25 people a day join TAPS.  They can call an 800 number where someone will answer the phone 24 hours a day, 7 days a week. Sometimes our CEO, Bonnie Carroll, herself is the one who is answering the line.

Almost 88 cents of every dollar go directly fun TAPS programs, which benefit so many.  My children and I have participated in grief seminars and camps.  Every Memorial Day weekend we join almost 2,500 people in Arlington for a 4-day national seminar for adults and grief camp for children.  This fall I will participate in TAPS first Women’s Empowerment summit.  We could not have made the kind of progress we have mad in our grief journey without the support of our TAPS family.

What originally drew you to the Theatre Lab partnership with TAPS and made you want to join the Family Improv nights? What encouraged you to keep participating?

In February 2019, we met at TAPS headquarters in Arlington, VA to participate in our first family improv session with Terah and Nia [Life Stories Teaching Artists].

I thought the class would help us to be “in the moment.” Since my husband died on February 5, 2014, we all spent a lot of time just trying to keep our heads above water.  Christina was 6 and Kate was 2 when Dave died.  So they needed a lot of time and attention.

As they got a bit older, I felt anxious often, and all of us worried about the future.  Six months before our first improv class, We had moved into a new house, which was a big change.  We felt like we needed to do something to help ground us in the moment.

We also needed an outlet to express ourselves without judging or being judged.  So I thought this improv class would be a good place for us to go. It’s hard to tap into feeling silly or spontaneous when you’re grieving. 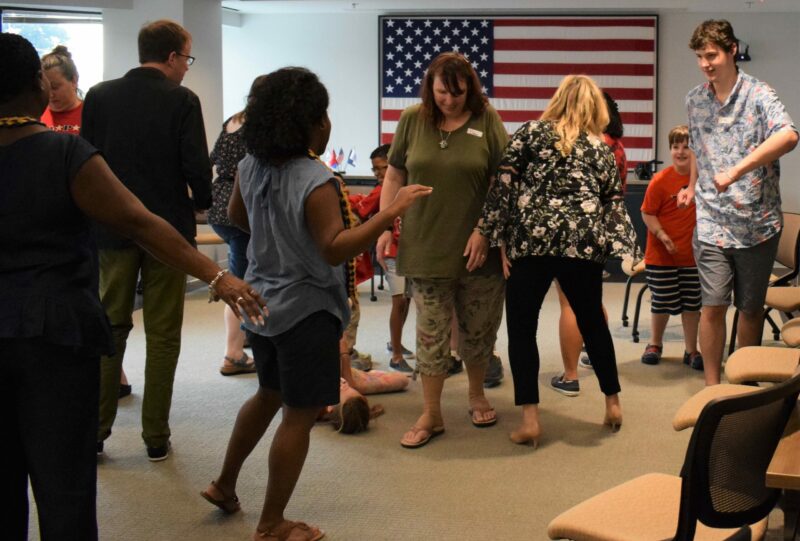 Tell us about a memory from either the Family Life Stories program/Improv Nights or the Adult Life Stories Program?

All of the TAPS families whom we me met by attending the Family Life Stories program and Improv Nights were people whom we’d never met before.  We quickly bonded.

All were welcomed.  Our personalities were all different.  Our loved ones died in different manners of death.  But we were united in a common bond of military service.

For the family of young boys whose dad died by suicide, this family improv nights in February 2019 was their first TAPS event.  And so they have grown to associate TAPS with improv and having fun.  And now whenever their mother says “We’re going to TAPS,” whether it is improv, a TAPS grief camp, or some other event, both boys enthusiastically reply, “YES!!”

How has the Life Stories Program affected your life (or your daughters’?)

The Life Stories Program has helped bring my daughters and I closer together.  It sounds simplistic to say that the loss of a parent creates a huge chasm in the family unit.  But it does. And if all of the remaining family members don’t do the hard work of integrating the loss into their lives, then they will be at risk of becoming even more divided and distanced from one other.

Life Stories has helped me continue to confront negative emotions about our loss and to be more conscientious about being present.  I am more mindful not to be looking at my phone when one of my daughters is talking to me.  I realize that I still have grief work to do.

And all of us have learned to accept that our loss is not something outside of ourselves, but is something that we need to blend into all the other aspects of ourselves.

What value do you think storytelling and improv have for people experiencing trauma?

For anyone who is processing trauma, at some point they will feel stuck.  Whether they feel stuck in a cycle of negative feelings, or something else, people who experience sudden, unexpected, and/or frightening events that have a negative impact can feel crushed by the weight of the trauma.

And so it is important to figure out how to dislodge this “stuckness.”  One way that has been effective for me is to tell parts of my story out loud, and to add as much detail as possible. Another is to participate in improv, and to force myself to be in the moment, instead of worrying about the future, or spending so much time trying to hedge against future risks.

How has your relationship with The Theatre Lab changed or grown over the years?

I would NEVER have considered myself an actor, and certainly wouldn’t have taken acting classes or participated in a play or anything like that.

But after participating in my first improv class, I have grown to appreciate the many, many benefits of improv, storytelling, and acting – well beyond the entertainment value that these have.  If you told me in high school that I would be taking a class on how to teach improv, I most definitely would have laughed you out of the room.

But that’s where I am now.  At some point in the future, I can foresee co-hosting an improv session or series as part of The Theatre Lab.

What was your experience like joining the Life Stories Institute after having been a participant in the Life Stores program with TAPS?

I have always loved learning how “sausage gets made.” I have mostly worked in public policy at the local and regional level as an advisor to decisionmakers, and I love being a part of all the messiness that is a necessary part of executing good policy

When I joined the Life Stories Institute after having been in the Life Stories program for more than two years, I felt like a junior staffer in city hall again.  I learned about who the stakeholders were, and how to engage them.  I learned how to create an environment where student stakeholders could feel safe enough to be candid.  And I learned how to emulate the teachers I had when I was in the Life Stories program at TAPS so that I, too, one day could elicit the best, and most authentic expressions from my own students as we all worked to create something good that would have a positive impact, even beyond the individual person.

How do you hope to see the TAPS and Theatre Lab partnership evolve in the future?

I hope to see improv be a regular offering at all TAPS seminars, programs, retreats and other events.  Improv’s principles of staying in the moment, accepting what comes your way, and being willing to say “yes, and…” integrate nicely with so many of TAPS programs and goals.

I think the Theatre Lab’s improv and Life Stories programs would particularly benefit TAPS’ Men’s Program, and I would like to see what would happen if The Theatre Lab made an intentional outreach to the leaders of this program at TAPS.  It’s possible that the Men’s’ Program is not yet ready for this kind of activity, and if so, that’s ok.  But I would continue to offer to train TAPS staff in improv, because I think men have an even greater challenge than women when it comes to dislodging “stuck feelings” and traumatic events.

I would also like to thank Deb Gottesman, Buzz Mauro, Terah Herman-Saldaña, Nia Medina, Madeleine Regina, and all of the teachers both at the Life Stories program and at the Life Stories Institute, for being so generous with sharing their deep and vast reservoir of knowledge that they have cultivated. 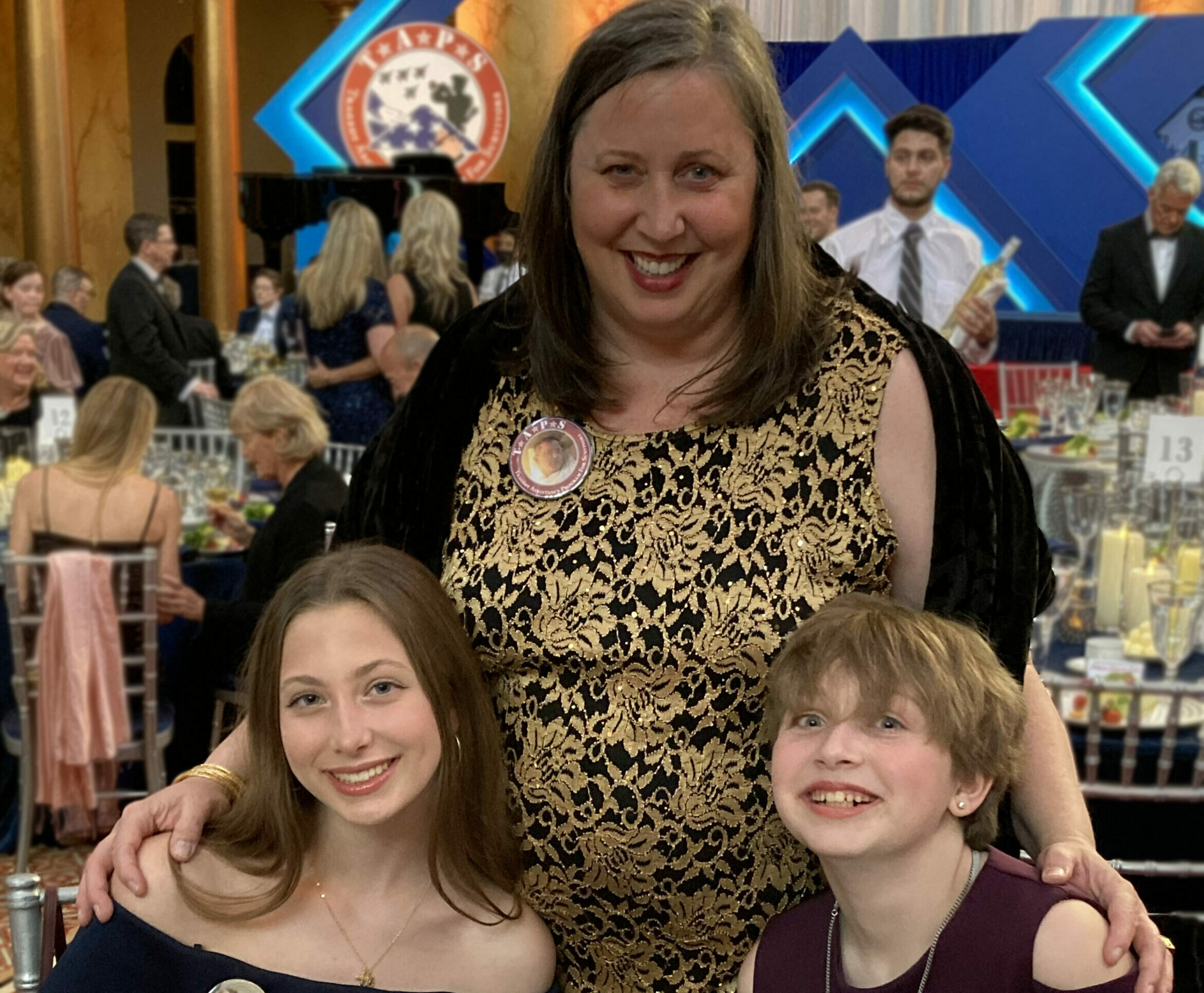