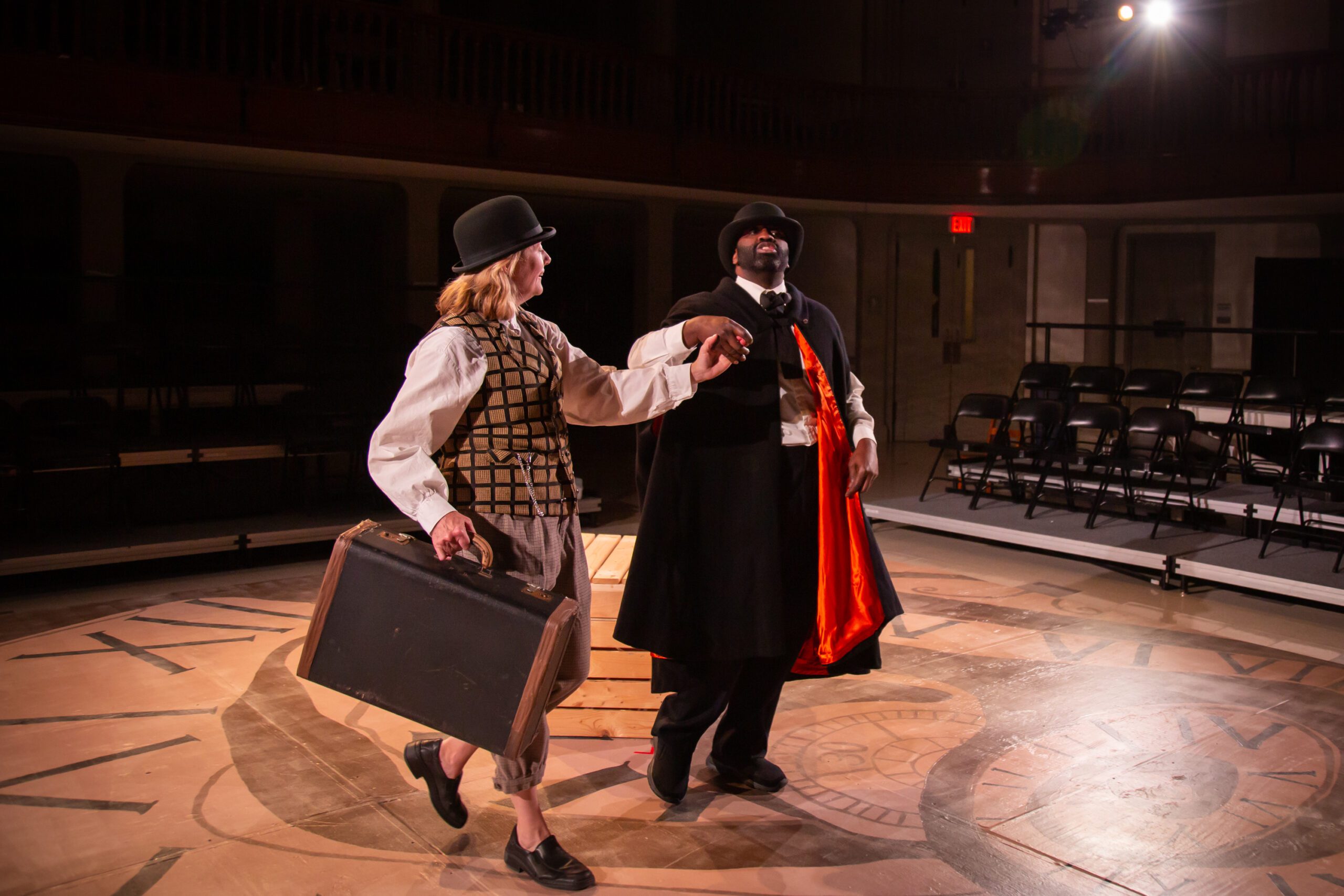 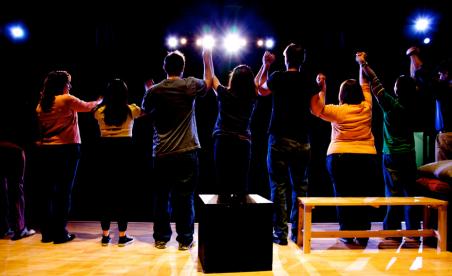 About The Theatre Lab

The Theatre Lab is Washington, D.C.’s largest and most comprehensive independent, nonprofit school for the dramatic arts.

For nearly 30 years, The Theatre Lab has been transforming lives through theatre education. We work to make both the artistic and the real-life benefits of theatre training accessible to all. Through our courses, camps, and programs, The Theatre Lab enrolls over 2,800 kids, teens, and adults a year. Offerings target beginners and veteran actors alike through a wide range of classes designed to fit busy schedules—summer camps for kids, Saturday acting classes, acting or playwriting classes for rookies, public speaking for non-theatre professionals and more. For those 18 and older preparing for a theatre career, our intensive, year-long Honors Acting Conservatory is the closest thing to graduate-level training students can get without having to quit a job to attend school full-time. Our distinguished faculty comprises top-notch, working theatre artists who perform, write, or direct theatre around town. As one student evaluation put it, our talented faculty are “invested in your growth, extremely knowledgeable, and experienced.”

The Theatre Lab’s uniquely nurturing, inclusive environment is felt through small classes that stress personal and artistic growth. We set high expectations for students at all skill levels and we believe that all students have limitless potential. Theatre Lab classes boost success on stage and off by teaching skills applicable to a career in theatre or elsewhere. Students and parents tell us that Theatre Lab classes result in heightened confidence, flexibility, social ease, and ability to work on a team. These benefits power success on the larger stage of life, not only in the theatre.

We put into practice our belief that theatre is for everyone by extending theatre education to traditionally underserved populations. We do this by offering tuition assistance and work-study to disadvantaged kids, youths, and adults. In addition, we run innovative, free Life Stories programs for incarcerated and at-risk youth, homeless women, adults and teens in addiction recovery, wounded veterans, and seniors throughout the D.C. metro area. Life Stories gives vulnerable individuals a unique opportunity to transform how they view themselves and the world around them through creative self-expression.   The Theatre Lab has been featured three times in the Catalogue for Philanthropy as one of “the best small charities in Washington.” Our directors have received the prestigious Linowes Leadership Award from the Community Foundation for the National Capital Region for their efforts to improve the metropolitan community through accessible arts training. We received the Mayor’s Art Award for Innovation in the Arts, and the President’s Committee on the Arts and Humanities has recognized us as one of the 50 “top arts- and humanities-based programs in the country serving youth beyond school hours.

The Theatre Lab was born in 1992, when Deb Gottesman and Buzz Mauro, just out of graduate school and keen to test their new skills as acting coaches, started a modest enterprise. Their mission at the time was to coach drama students for college and graduate school auditions. Their business became a school when five students agreed to pay $100 each to be taught basic acting.

It all began when Deb and Buzz met on the first day of graduate school at Catholic University and became fast friends. Both had arrived at Catholic’s M.F.A. acting program from other fields. Deb held an undergraduate degree in psychology and had been a counselor for emotionally disturbed youth. Buzz had taught math and English in D.C. and Haiti.

Here we are in a town known for its transience, in a field that requires actors to be on the move every few months, and yet so many of them have come to The Theatre Lab to train or teach and have just stayed and become like family. When we first started out I never would have guessed that would happen.
Deb Gottesman, Co-Founder & Co-Executive Director

When they graduated from Catholic, the two were already working actors—Buzz at the newly formed Signature Theatre, Deb at Washington Shakespeare Company and Arena Stage. Passionate about theatre, they took the advice of their mentor, Professor William H. Graham, Sr., not to sit by the phone waiting for a casting director to call. That’s when they launched their coaching service, the precursor to today’s Theatre Lab.

In need of business expertise to complete their team, in 1993 Deb and Buzz asked fellow actor and singer Michael Rodgers, who had a degree in arts management, to join them. That year The Theatre Lab was incorporated as a nonprofit and began teaching in the District of Columbia.

Advertised early on as “A foot in the door that won’t cost you an arm and a leg”—word about The Theatre Lab spread quickly. Deb and Buzz began hiring faculty to teach additional courses. Over time they added big names to their faculty roster and developed a uniquely comprehensive set of year-round offerings for students of all ages and experience levels.

True to its founders’ view that theatre is for everyone, in 1996 The Theatre Lab began launching fundraisers to support scholarship programs for disadvantaged young people to attend Theatre Lab classes. In 2000, Michael Rodgers founded the pioneering Life Stories program, which has brought life-transforming opportunities for creative self-expression to vulnerable populations within the community, such as incarcerated youth, homeless women, and seniors. (Michael left The Theatre Lab in 2007 to pursue other passions.)

We’ve been through many life cycles here. Two of our students met in class and got married, some of our early alumni are now sending their kids to camp here, and we even have teens from our first Summer Acting Institutes writing in to tell us they’ve started their own theatre companies.
Buzz Mauro, Co-Founder & Co-Executive Director

In 2006 The Theatre Lab launched the Honors Acting Conservatory, an intensive, year-long program for those 18 and older preparing for a theatre career. The program is the closest thing to graduate-level training students can get without having to quit a job to attend school full-time.

That same year, The Theatre Lab consolidated its offices and teaching spaces into the Calvary Baptist Church—a historic building with office space, a variety of classrooms, and nearly unlimited access to a 200-seat theatre space and two additional performance spaces with flexible seating—right in the heart of Penn Quarter, one of D.C.’s busiest theatre districts. In 2021, The Theatre Lab moved a few blocks to a more modern space at Mount Vernon Place United Methodist Church. In its current home, the school continues to have access to classrooms and offices, and has an expanded partnership with Washington Stage Guild and the Undercroft Theatre.

The Theatre Lab continues to grow and evolve: It won the Mayor’s Arts Award in 2010 for Innovation in the Arts, has been featured three times in the Catalogue for Philanthropy as one of “the best small charities in Washington,” and its executive directors have received the prestigious Linowes Leadership Award from the Community Foundation for the National Capital Region for their efforts to improve the metropolitan community through accessible arts training. The President’s Committee on the Arts and Humanities has recognized The Theatre Lab as one of the 50 “top arts- and humanities-based programs in the country serving youth beyond school hours.”

In 2018, Youth Programs Director, Terah Herman-Saldaña, was selected by the United States Department of State to take part in the Professional Fellows Program, an international exchange program, in which she took The Theatre Lab’s Life Stories program to Malaysia. And in that same year, the Theatre Lab was selected as one of 47 Washington-area cultural institutions to participate in the Arts Innovation and Management training program, part of Mike Bloomberg’s American Cities Initiative, in an effort to help cities generate innovation. In 2020, The Theatre Lab adapted to the global COVID-19 crisis by pivoting to provide enriching online theatre arts courses for youth, teens, and adults — and awarding more scholarships to people in need than ever before.